by Craig Miller.  Thanks.  Modified by Deid Reimer so if it doesn't work it's my fault.

git is open source industry standard distributed revision control system (RCS). There have been other RCS such as SVN and CVS. git was developed by Linus Torvalds the author and maintainer of the Linux Kernel. There are thousands of Linux developers using git.

What is a Revision Control System?

A RCS is software which allows multiple users to save their work in an ordered fashion. The RCS takes care of merging files when multiple people are working on the same file. Additionally it acts as a chronological snapshot of the work, allowing the developer to easily roll back to previous versions.

Why do I want to use git?

Although initially developed to be used with the Linux Kernel, git has become the standard RCS for application development as well. Because it was designed from the ground up to be a distributed system, copies of the git repository can be located at different locations, by different people, and git handles the merging of the differences. This means that using free services such as github or gitlab become an automatic back up of your project, complete with all of the versioning history.

Installing git is quite easy,  on Pi Linux, just type:

It is easy to create a git repository, just:

Creating a git repository is as easy as changing to your project subdirectory, and typing:

It is also a good idea to add your name and email address to the repository:

If you are going to share your project with the world, then it is a good idea to have a README.md file explaining what your project is, and how to use it. And a license file. I recommend an open source license such as GPL (Gnu Public License) or BSD (Berkeley Standard Distribution). You can find these online.

adding the project files to the git repository

Once your project files, README.md, license files are in the subdirectory, it is time to add them to the repository. Type the following:

The period means add everything in this directory

Check the files into the repository

An editor will pop up, asking you to type a description of this commit. Type something that makes sense to you (and others). Since this is the initial commit, something like the following is common:

You are all done, take a break, and get a coffee!

Displaying the current commit etc. status - from discussions at the Saturday Presentation

On branch master
Your branch is up-to-date with 'origin/master'.
Changes not staged for commit:
(use "git add <file>..." to update what will be committed)
(use "git checkout -- <file>..." to discard changes in working directory)

Untracked files:
(use "git add <file>..." to include in what will be committed)

On branch master
Your branch is up-to-date with 'origin/master'.
Changes to be committed:
(use "git reset HEAD <file>..." to unstage)

Untracked files:
(use "git add <file>..." to include in what will be committed)

On branch master
Your branch is up-to-date with 'origin/master'.
Changes to be committed:
(use "git reset HEAD <file>..." to unstage)


On branch master
Your branch is ahead of 'origin/master' by 1 commit.
(use "git push" to publish your local commits)
nothing to commit, working tree clean

And, everything is up to date.

What have I done?

added .gitignore to be added to notes

Added this so git status will show something.
+
+a line for diff
+

Or a GUI way of Viewing git version info and status.

git doesn't have to be all command line, although most folks probably use the CLI.

A useful tool to see the history, and what has changed in a repository is gitk. It shows those comments you made when you made your commits as well as a chronological history of your commits, high lighting the differences with each commit.

You will have to install gitk: 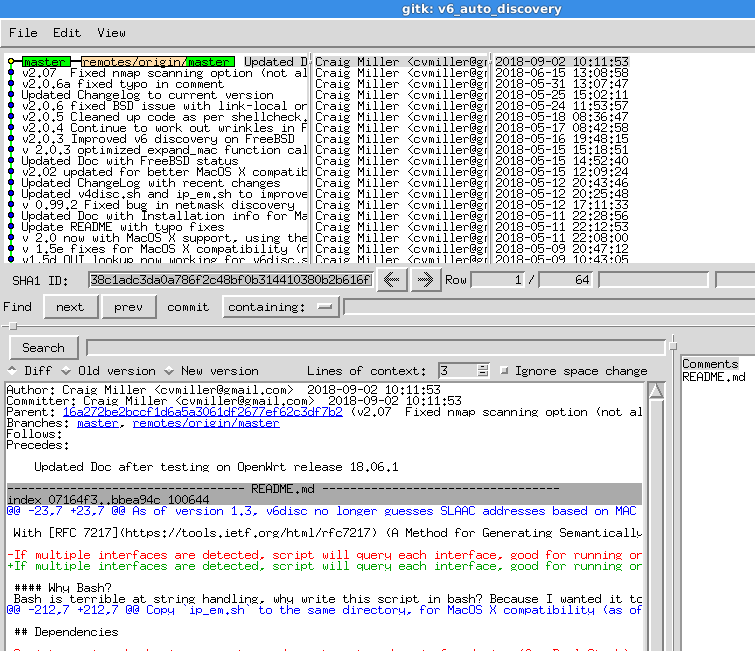 As you can see it is a good idea to add the version number of your project in the commit comment.

So far your repository is only located on your computer. If your computer crashes with an unrecoverable hard drive (or SSD), then all of your hard work is lost. Fortunately, there are services such as github or gitlab which will not only store your repository, but share it with the world, if you would like.

To create a copy of your repository on github you just need to do the following steps:

Create a new repository on github

Click the + -> New Repository on the github's web interface, or the New in the upper left.  And follow the directions. Once the Repository is created, it will give you a few lines to paste into your terminal to setup your local git to push up to github. Github has documentation on setting up a remote.

How do I authenticate?

Create an ssh key.  I created one for gethub - different from my other ones.

This creates a bit of complexity.

When prompted for a file name to save the keys  e.g.  "Enter file in which to save the key (/home/deid/.ssh/id_rsa):"  Don't take the default.  Name it something else and save it in whatever directory makes sense to you.


Now that you have ssh rsa keys, cat the public key

Changes to your project

Then to push further changes to your project up to github, just type: